Junkanoo in The Islands Of The Bahamas

To experience the vitality of Bahamian culture and art make plans to attend Junkanoo – either the traditional Junkanoo Festival over Christmas and New Year period or the new Junkanoo Carnival in April and May.

The spectacular Junkanoo Festival parade occurs in Nassau on Boxing Day (December 26) and New Year’s Day (January 1) from 1:00 a.m. until 8:00 a.m. You can also experience it on Grand Bahama Island, Eleuthera, Bimini and Abaco. All are energetic, colourful parades of brightly costumed people gyrating and dancing to the rhythmic accompaniment of cowbells, drums and whistles.
Plan ahead and arrive early, literally in the early hours, if you want to really experience the thrill of the Junkanoo Festival. In Nassau, some of the best views are on Bay Street, or on the street-side bench seats, or ‘bleachers’, which you may reserve in advance. 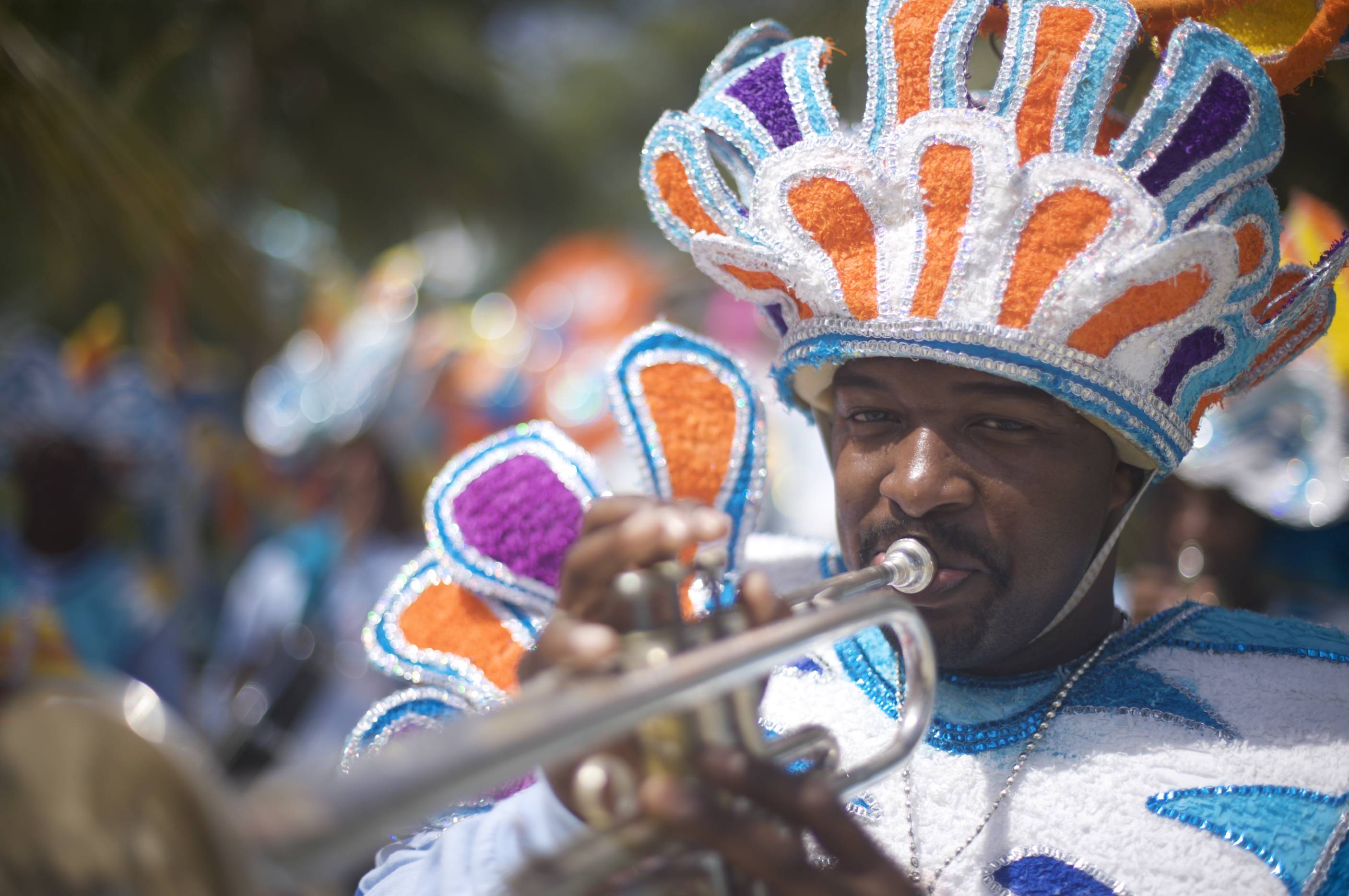 Junkanoo participants that you see rushing down the street are members of well-organized groups. These people work together year after year to make Junkanoo the exhilarating experience it is – a community-wide effort. Families, friends and neighbours gather within groups – often from 500 to 1,000 members. In Nassau, Junkanoo groups go by such colorful names as “Valley Boys”, “Saxons”, “One Family”, “Vikings”, “Roots” and “Fancy Dancers” – names that soon become very familiar as spectators holler for their favourite.

The groups are organized around a particular theme with their costumes, dance and music reflecting it. At the end of the Junkanoo processions judges award cash prizes. The three main categories for the awards are: best music, best costume and best overall group presentation.

Junkanoo is reminiscent of New Orleans’ Mardi Gras and Rio de Janeiro’s Carnival but this distinctly Bahamian form of carnival exists nowhere else.
Such is the popularity of Junkanoo that the new format Junkanoo Carnival was created in 2015, which offers a mix of Junkanoo parades for more people to join in; you can even hire costumes! And there’s a range of concerts and cultural events taking place over a period of a few days and evenings including Music Masters – the song and music competition, Junkamania*, the traditional sounds of Rake ‘n Scrape and Da Cultural Village offering Bahamian Food & Booze.

Junkamania is a concert of Junkanoo orchestras which takes place on Bahamas Junkanoo Carnival Thursday. Junkamania Groups will let their imaginations run wild producing new and exciting sounds by fusing traditional Junkanoo instruments with other instruments from across the full music spectrum.

In 2016 the Junkanoo Carnival dates are 14-16 April on Grand Bahama Island and 5-7 May on Nassau. http://bahamasjunkanoocarnival.com/ 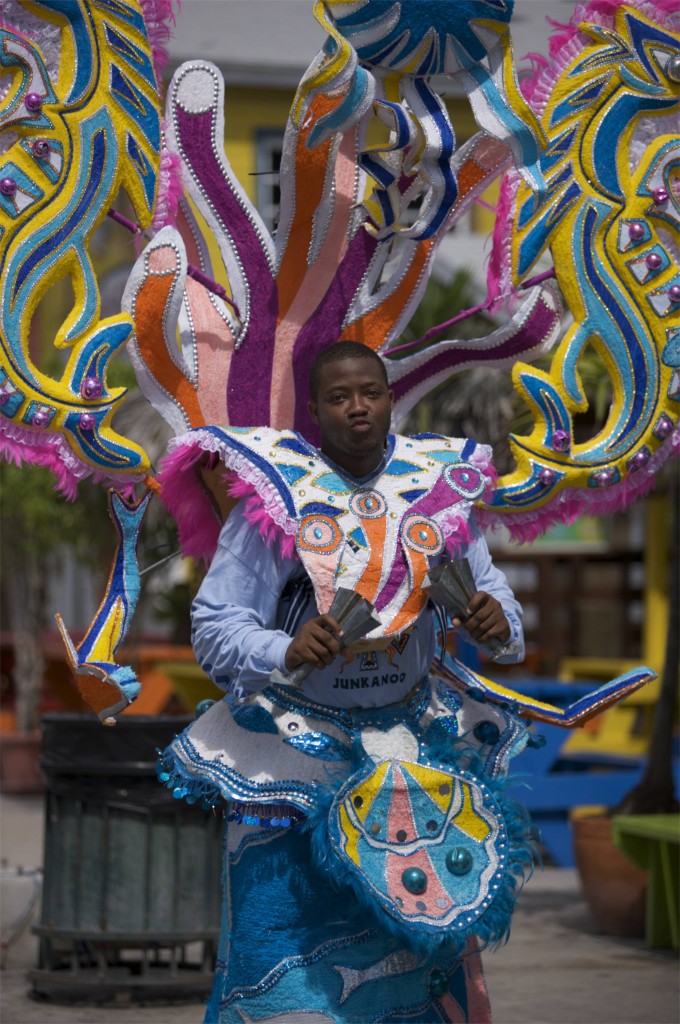 The History – Junkanoo first began as a temporary celebration of freedom for slaves who were given three days off at Christmas time. Donning scary-looking masks, slaves played homemade musical instruments (drums and bells) and cavorted about freely on the island.

The origin of the word “Junkanoo” is unknown. The most popular belief is that it’s derived from “John Canoe,” an African tribal chief who demanded he be allowed the right to celebrate with his people even after he was brought to the West Indies as a slave. Others believe the name is from the French “gens inconnus,” which means “the unknown people” and refers to people wearing disguises and thus being unknown.

Junkanoo’s roots can be traced to West Africa. In fact, other areas in the region that practiced slavery — like Bermuda and Jamaica — had their own versions of John Canoe parades.

Junkanoo probably began in the 16th or 17th century. Around Christmas, Bahamian slaves were given a few days off. This allowed them to leave the plantations to be with their families and to celebrate the holiday with music, dance and costumes. In the early years, Junkanoo participants wore grotesque masks and walked on stilts. They were allowed to move around anonymously and let off steam. 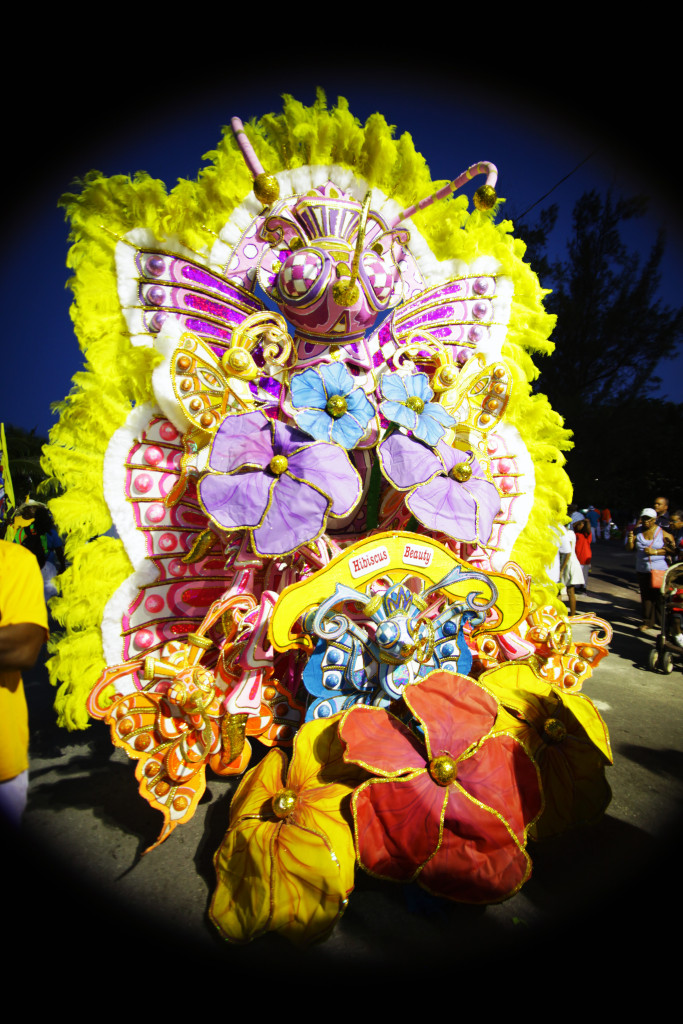 After slavery was abolished, Junkanoo almost disappeared, but a few islanders kept the tradition going. Over time, Junkanoo’s popularity has waxed and waned. Today, it is a joyous celebration of freedom. It is an important part of the Christmas season, and The Bahamas is the only country where you can experience it.

Junkanoo Groups – competition among groups is fierce, so members choose a theme and keep it a secret until the day of Junkanoo. They spend months preparing for the event at their “base camp,” or “shack” as they call it. The dancers work on choreography, the musicians practice music and the costumers work on their creations. 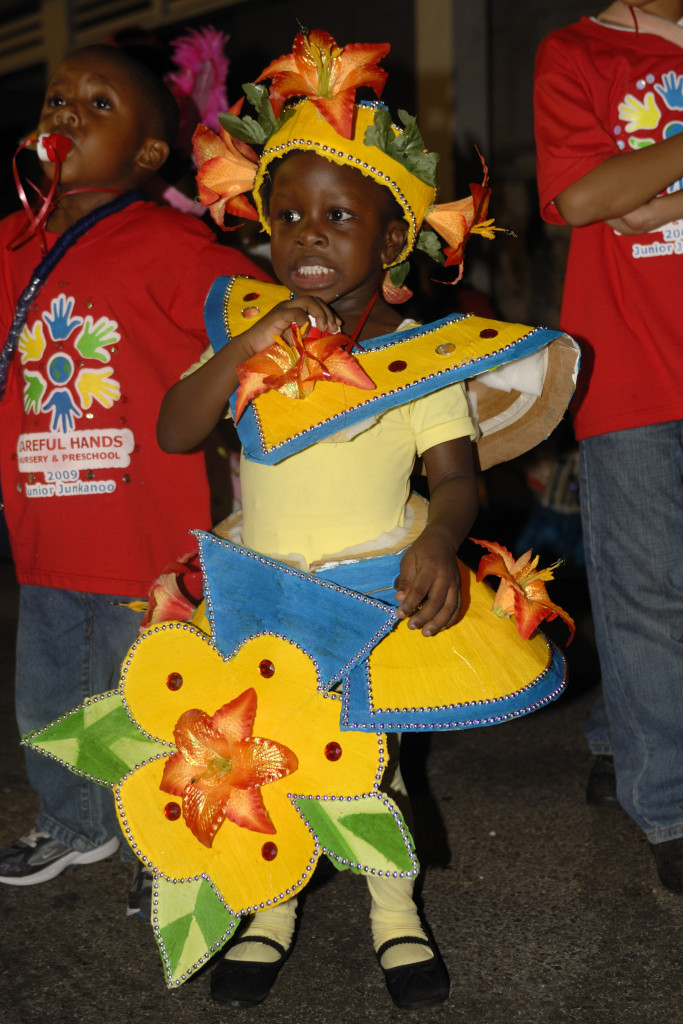 Costumes today are made out of crepe paper that is meticulously glued to fabric, cardboard or wood. They usually consist of a headdress, shoulder piece and skirt, which are elaborate and brilliantly colored. Group members make their own costumes and it may take them up to a year to complete the intricate creations.

Distinctively Bahamian, the music you hear at Junkanoo today is very much as it has always been. Rhythmic goombay drums, copper bells and mouth whistles soon sweep you up in the Junkanoo beat.

Music is a most important part of Junkanoo. The rhythmic sounds of goatskin drums, cowbells and whistles — accompanied by a separate brass section — create an infectious beat that’s too strong to resist!

Slaves, who originally made their musical instruments from cast-off items, fashioned rum or food containers into drums and scrap metal into bells. Today’s musicians use similar methods. Like their ancestors, they stretch goatskin across the drum opening and “tune” it by burning a candle under the skin to tighten it to the right pitch.

Stay up to date with the top travel news stories by signing up to our newsletter or following us on Facebook.